Instead of bore-ing you with details as to why I don't blog enough, I'd like to share my schedule for this year's Sydney Film Festival. It seems like everyone has done one, so why not paint myself like a sheep and join in! 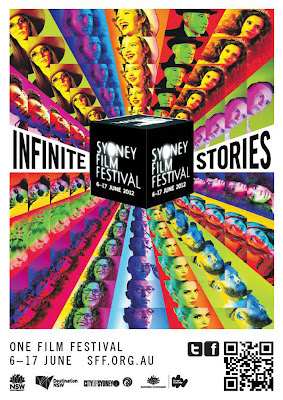 Sydney Film Festival means a bit more than watching movies all day and being completely immersed in festival-mode for over a week. To me it was arguably (between me and, myself) the starting point at which I began my love for film and desire to work at film festivals. My first SFF was in 2009, when I had just left a photomedia degree for film school. I thought volunteering at SFF would be a great way to watch lots of films and meet like-minded people. Watch lots of films, and meet like-minded people I did. I volunteered at a range of other film festivals after SFF that year, and also broadened my knowledge on film distribution through festivals. I also met Kieran who, in flowerless language, is my partner in crime to this very day. So SFF has been a bit of a significant event in my life, and it's always a pleasure (understatement) to be returning to it year after year since that very memorable year of 2009.

I was lucky enough to be able to book into more films than usual this year after receiving a flexipass gift from Kieran. We split it, of course, and still bought another afterwards. Unfortunately this year I am missing out on 3 full days of festival goodness due to travel.

There are some other films I wish I could fit in. To name a few, BULLY, MONSIEUR LAZHAR, POLISSE, THE KING OF PIGS and HOLY MOTORS.

Anyhow, here's my schedule for this year's Sydney Film Festival:

JUNE 14
The World Before Her
Our Homeland

And to finish this post, I thought I'd share this memorable scene from Annie Hall. I sure hope I don't have to listen to anyone like that in the queues this year!

Posted by Raelene Loong at 8:08 AM No comments:

In my media class today, we looked at the history and ideas in locative media and mapping. We were shown this great example of locative media by artists Janet Cardiff and George Bures Miller whose collection of works titled Audio Walks demonstrate the use of audio as a way of telling a narrative or imaginary stories that relate to a particular, physical space in which the participant is required to move and interact with through a series of audio clips.

Cardiff's introduction to the Audio Walks sums it up perfectly:


The format of the audio walks is similar to that of an audioguide. You are given a CD player or Ipod and told to stand or sit in a particular spot and press play. On the CD you hear my voice giving directions, like “turn left here” or “go through this gateway”, layered on a background of sounds: the sound of my footsteps, traffic, birds, and miscellaneous sound effects that have been pre-recorded on the same site as they are being heard. This is the important part of the recording. The virtual recorded soundscape has to mimic the real physical one in order to create a new world as a seamless combination of the two. My voice gives directions but also relates thoughts and narrative elements, which instills in the listener a desire to continue and finish the walk.

I found that this was such a great idea and method for storytelling that combines the aural pleasure and effect of listening to a soundscape while moving through a space which corresponds to the audio. After hearing Her Long Black Hair (2004), I loved this idea of dislocation between time and space, the relationship between the physicality of a space and our perception of imaginary space through audio. I'll have to do a bit more research on this form of locative media and mapping to find out if there was something similar in Sydney. It would definitely be worth looking out for and experiencing.
Posted by Raelene Loong at 3:07 PM No comments:

I am late for many things. For this I am well known for. Many things include great classics, like Woody Allen's Manhattan which I have finally (emphasise - finally) seen tonight.

There is nothing dishonest about Allen's films from what I have known - I have only seen this, with his newer films Match Point, Vicky Cristina Barcelona and possibly something else I fail to remember at this stage. He is so honest and self-deprecating that he is so enjoyable to watch, especially in a film like Manhattan. I have always seen him as the kind of director and writer who will make anything he chooses, and will not care to hear about what you think of it because in fact he already knows. For this, I really admire him for that.

So, next on my to-do list, or 'homework' - forget about the cultural industries and practices readings, see Annie Hall (1977).

By writing so here, I will feel much more obliged and willing to do it. I should try it out some time on readings - it might work.
Posted by Raelene Loong at 11:08 PM No comments:

A multitude of characters, one single phone call, many different emotions. This great little clip is a 7-minute long 'compilation' of snippets from scenes that involve a phone call - from dialing a number to hanging up - from films that span the history of Hollywood as far as interests go.

I love the moment when every conversation becomes silent, as each character listens back into the earpiece and react in their own way. We might not necessarily know the contexts of these films to completely understand what is being said and felt, but I feel therein lies the magic of this piece.
Posted by Raelene Loong at 8:35 PM No comments:

I recently revisited Mike Mills' second feature film Beginners (2010) after giving in to my quite embarrassing reignited love of Ewan McGregor (I saw Perfect Sense (2011) over the weekend, more on that next time) and thinking about Mike Mills' interesting graphic design and slightly quirky, dislocated style. (That is not to say his films are not cohesive in any way!)

A film seen twice is an entirely different film all together. I love Mike's playful and awkward take on the innocence within every one of us, older, old or young. We lose and we have lost - still it makes us no less of the adolescent we were in our past, and we are still beginners this way. We love and find happiness, yet it makes us fearful. We fear our future, yet it makes us more of who we are.

It's interesting to see that even in Mike's first feature film Thumbsucker (2007) he explores this idea of adolescence and a sense of 'coming of age'. I love this idea of everyone no matter how old is still 'coming of age' - whether they are falling in love again at 38, or dying of cancer. Beginners has a sort of honesty that says 'Y'know what? It's okay to grow up and still be scared'. These ideas are something I'd really like to explore somewhere. I'm always reminded to look back on my childhood for inspiration, and seeing this again has brought me back to this idea.
Posted by Raelene Loong at 11:43 AM No comments:

'What is the film that made you want to continue exploring Korean cinema?' (Part 2)

To continue on from my entry on how I discovered Korean cinema, I've decided to talk about another film that really changed the way I looked at Korean film and the different ideas in cinema. My previous entry highlighted my first Kim Ki-duk experience, and it was the beginning of what I am today.

I raved about 3-Iron (2004) and how much I loved it to Kieran not long after that. I had already, by then, heard about a few big names in the Korean film world. Bong Joon-ho, Kim something or rather, another Kim this and that, and then - Park Chan-wook. I heard much about Old Boy (2003) throughout film school, here and there in pockets throughout the interwebs and still did not rush to see it. It was kind of like the hype around Kill Bill (2003). It's awesome, It's epic, It's amazing. Or so I had heard. Kieran had a couple of Park's films in his gargantuam of a DVD collection, one of which was J.S.A.: Joing Security Area (2000), a film I had not heard about and had little interest to see at the time. The title alone was uninteresting - that and I had little concrete knowledge of the DMZ and the current situation between the North and South. I looked past all of this and decided to give it a go. 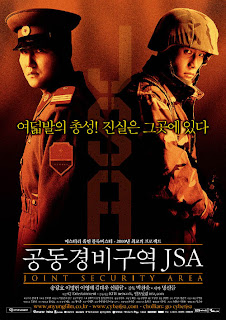 I'll be absolutely honest with you: I could not and did not get through the first 20 minutes of the film in my first viewing. It was all talk, no substance to me. I wasn't paying attention to the lengthy discussions between Lee Young-ae's character and Mr Tall Swiss man, who to me seemed like an excuse of a 'white' man in an Asian film. I fell asleep, and looked no further past the beginning. Kieran had told me what a great film it was, and I simply could not see it. And that was that.

Continue reading the rest of this article at the official KOFFIA blog here.
Posted by Raelene Loong at 5:41 PM No comments:

'What is the film that made you want to continue exploring Korean cinema?' (Part 1)

After writing a piece on genres in Korean Cinema for last year's Korean Film Blogathon, I decided to take part in the challenge again. This year I am writing a short series based around the question 'What is the film that made you want to continue exploring Korean cinema?' I felt it would be a good way to reflect on the last few years and where I am today, an assistant film programmer at Cinema On The Park and being heavily involved in the coordination of the first Korean Film Festival in Australia over the past 2 years.

This entry is also available on the KOFFIA Blog. I highly recommend that you have a read of some of the other great entries taking part in this year's blogathon.

Hope you enjoy the next few entries. Do come back in the next few days for my next entry.
Read more »
Posted by Raelene Loong at 3:16 PM No comments:

CUTTING SQUARES is a blog I keep to write about my experiences with film, things that inspire me, and everything else inbetween.

Raelene Loong
Malaysian-born, living in Sydney. I love film and sometimes dabble in making films too. I'm back at university for the second time to complete a Communications degree, and spend part of my time working as an assistant film programmer for a weekly film night in Sydney.

AWESOME PEOPLE I KNOW WITH BLOGS